The story of little Molly – why having pet insurance paid off in a big way!

The story of little Molly – why having pet insurance paid off in a big way!

A very unfortunate event, just before Christmas has turned into a long but successful recovery for little Molly, a gorgeous Pomeranian cross puppy.

Tracey arrived with Molly at our Tauranga clinic entrance just as our doors were opening at 8 am – a few days out from Christmas.

Molly had jumped out of Tracey’s arms as she was putting her down, but landed in a funny way when she did so. “She let out a yelp and I immediately saw her lower front leg was pointing the wrong way,” says Tracey.

Veterinarian Dr Tony Austwick was able to see her straight away and knew just by looking at her that Molly was suffering from a displaced fracture.

Because Molly was only a few months old, the bones in her legs were still extremely small and Tony recommended a specialist in Auckland. 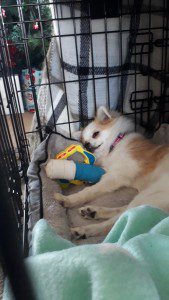 “With Molly being a Pomeranian cross and being so young in age – and also knowing how difficult fractures in these breeds of dogs are, I chose to give Tracey all options, including referring Molly to Veterinary Specialists Auckland,” says Tony.

He made sure she was out of pain and Tracey and Molly left for Auckland – where the team at VSA was waiting for them when they arrived. Molly was in surgery later that day.

The decision to take Molly to Auckland was made easier, because luckily, Tracey had taken out Pet Insurance through Southern Cross.

“We initially took up the Free Six Week Cover which Southern Cross offer, which we claimed on as Molly chewed on a rotten stick at the beach, vomited and ended up with laryngitis….I then took the full policy out,” says Tracey.

Six weeks after the accident, Molly has recovered well and the decision to take out pet insurance has been an absolute blessing for the family.

“She has spent the last six weeks contained in her crate with short walks, which for a 5 month old puppy was very hard on her,” says Tracey. “She still has a plate in her leg, which may need to come out sometime – but for now she is raring to go,” she adds.

“Molly’s broken leg cost $5600 to fix in Auckland – we hit the limit in one go. We have three kids – had we not had insurance we could not have afforded the surgery she needed. Both incidents with Molly were everyday occurrences- chewing on driftwood and putting her down from my arms – nothing dangerous,” says Tracey.

“Southern Cross paid out on both policies very quickly. I would not be without it for my dog now,” she adds.

We are so pleased there has been such a positive outcome for Molly, Tracey and all the family.

“Next lesson – no jumping,” says Tracey! 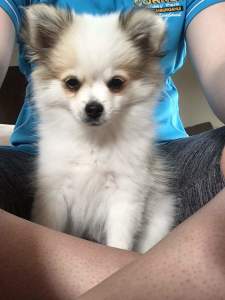